Passion, Technique, Precision, Research, Flavour: these are the five key ingredients, seasoned with a hint of Mediterranean craziness, that I try to bring to my dishes every day, sharing them with my team of chefs.

I define my cooking as being colourful, lively and intriguing, the fruit of continuous research, passion, curiosity, the right touch of craziness and a constant desire to try out new combinations.

After all, cooking is like life: you never stop learning or discovering new things. 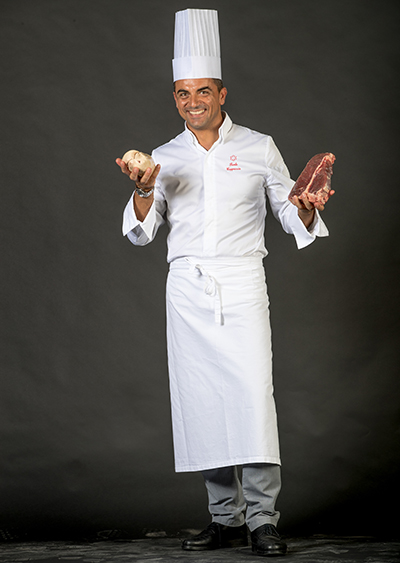 The executive chef Paolo Cappuccio has been following his vocation since he was 14 years old, working all over Europe. To keep his finger on the pulse of global cuisine, he completed a number of courses at different schools, one of the most expert being the Lenotre in Paris where he met the great Chef Joel Robuchon.

His experience and training include:
the Palace Hotel in Milan, Grand Hotel des Bains and Grand Hotel Europa e Regina in Venice, Hotel Splendido in Portofino, Grand Hotel Cala di Volpe on the Costa Smeralda, Grand Hotel Miramonti in Cortina, the Alpen Plaza in Val Gardena and the BioHotel Hermitage in Madonna di Campiglio. The Westin Palace Hotel in Malta, Gstaad l'Olden hotel in Switzerland, the da Cipriani restaurant in New York, the Curchevel 1850 at the La Cendrèe Restaurant in France, and the Le Roc Marten Restaurant in Cap Martin. In Chateaux Neuf du Pape, he met world-famous chefs such as Alain DUCASSE and Paul POMMEL, with whom he worked on many aspects of international and Mediterranean cuisine, developing a wealth of knowledge and experience. When he returned to Italy, he spent two years in Milan working for a prestigious banqueting and catering company, serving luxury fashion houses.

After years of working in the kitchens of prestigious restaurants in both Italy and France, in 2005, Paolo Cappuccio arrived in Madonna di Campiglio: it was here that he began to design seafood-based menus.

A sacrilege? It would appear not, considering that, in 2009, the Michelin guide awarded him one of its highly sought-after Michelin stars. At the time, he was the only Michelin-starred chef in the history of Madonna di Campiglio! (in 2012, the guide also awarded a star to another restaurant). In 2008, he became a food designer for a famous brand of Swiss watches, leading him to organise big boating events all over Italy. He also taught how to make Mediterranean cuisine, finger food and foie gras at the Cast Alimenti school in Brescia.

In 2012, he met the entrepreneur Federico Chignola and his wife Sara:
“I’d always had a high opinion of them, and there was instantly the right chemistry. He presented me with his ambitious project... He asked me to lead this new “custom-built” concept, in a dream location, with a big design and investment behind it. I’ve always liked a good challenge! So, I accepted without a second thought and he organised a team of 12 chefs, including some of my most trusted colleagues: Marco Marras, Mariano di Leo, Salvatore Cappuccio, Radu Cebotar, Vincenzo Vurchio and other excellent professionals!"
And off we went!